Mesomeso's yellow spinosaurus. She has blue eyes and some orange spots over her body.

She has a sweet and caring personality, almost always being worried about her friends and family. She is, however, according to herself, a coward and "quick to cry", and that the reason why everyone calls her Mesomeso (Japanese onomatopoeia for crying). This, on the other hand, is not completely true, as she proved her courage by openly supporting Toron in front of an angry crowd and by staying by her side in the midst of the crisis.

Prior the movie events

Little is known about Mesomeso's past. Her mother was sick and she was looking for red berries so she could help her mother's recovery. It is not known whether she has other members in her family or friends, but it's likely that she was bullied by members of her species, because of her personality, based on what she said to Toron during their first sentimenal talk.

After finally finding the berries for her mother, she is forced to hide because of the presence of a young Tyrannosaurus, that was approaching the place. She ends up being unable to hide her presence and, after being spotted, begs him not to eat her.

Her efforts seem to be in vain, since he seems determined to devour her. But, thankfully, an earthquake occurs just as he was going to devour her, saving her, and the piece of land on which they are ends up separating from the land and falls on the ocean, where it stood several meters away from the continent, without moving.

After talking about how problematic their situation was, because neither of them knew how to swim or fly, Toron tries to devour her again, but she convinces him to give up pointing out that if he ate her he would have only one meal, but if he left her alive she would catch all the fish that he needed to be satiated, and that for that reason he should keep her alive. He accepts the agreement.

They then have a conversation about who they are and their pasts, where they present themselves and Toron convinces her not to give up and to remain positive, for her mother's sake. She agrees and they begin to develop a deep friendship while living on the island.

She then proceeds to help Toron with his training to strengthen himself. Although she doesn't know the reasons for her friend to work so hard, she respects him and wants him to achieve his goals.

It's not known how much time passed since they were stranded on the island, but it is likely that they both spent at least a year together.

Eventually, another earthquake occurred and the piece of land they were on got close enough to the continent for them to reach it by jumping on nearby stones. After all of Toron's training, he showed that it wasn't impossible to reach the continent and carried her to solid ground. However, due to her nervousness in finally returning to the continent after all this time, she ended up forgetting to pick up the red berries her mother needed, and he came back to get them for her. Unfortunately, on the way back, he was attacked by a predator, and threw the red berries at her before falling into the ocean and disappearing. She was only able to watch the scene and just picked up the berries he threw before returning to the mainland, as she cried for her friend. She then travels back to her home and delivers the red berries to her mother.

Some time later, she appears again during the volcano crisis, where she helps Toron convince the herbivores seeking war against the tyrannosaurs to help them protecting the forest.

Although she didn't help much physically, she played a crucial role in protecting the forest, since without her the herbivores present wouldn't have agreed in helping building a barricade to stop the lava.

After helping Toron preventing the forest's destruction, they talk normally as they did while they were trapped on the island, showing that no matter how much time passes, or how far they are, nothing can end the friendship. She then watches him reunite with his mother and, some time later, says goodbye while returning to her home, stating that they will see each other again soon.

Although they met in a very adverse situation, both became friends extremely quickly, and began to foster a feeling of mutual respect between them. The two have helped each other countless times and do whatever it's possible to protect each other and their friendship. Both have already said they are thankful for meeting the other. 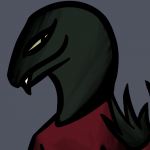